Interview 1
This interview was done by http://www.audiotekbook.com/ (under construction) in early 2010.
-

Holger Lagerfeldt is a Danish composer and producer, known for numerous hits in pop and dance. With a Danish Grammy nomination as Producer of the year in 1999, 50 Gold and Platinum records, plenty of number 1's, and starting the first internet based mastering facility in Denmark, Holger has been all around the scene.

Hey Holger. How did it all start, and what kickstarted your career?
- Hey, happy to answer your questions.

My interest in making music began at a very early age. I attended a creative and musical small school from the age of 6 where I started out by playing the drums and then moved on to the piano. I was very inspired by the Commodore 64 computer music scene in the 80's and early 90's. That fueled the desire to make my own music.

I bought a Korg X3 workstation keyboard, a small Mackie mixer and DAT recorder in 1993. I sync'ed the X3 manually to my Amiga 500 running Pro Tracker with a half megabyte sampler, and got a few friends together to record some vocals. That first song I made got played on the biggest radio station in Copenhagen. We simply knocked on the door and were interviewed live on the radio - talk about beginner's luck!

I then spent a couple of years in various studios, mostly at night when everybody else wasn't using the studio, learning the ropes. I got my first real record deal in 1995, and later in 1997 I got my big break with the Danish act S.O.A.P. which I produced and wrote. The act got signed to Sony Music and sold 1.4 millions units world wide. It was a number one hit in Scandinavia and a big hit in the rest of Europe and Australia. That kicked the door wide open for me, and the year after I received a Danish Grammy nomination as Producer of the Year.

You seem to have some quite expensive gear. As a new guy on the scene it can be quite difficult to raise finances to launch a music production studio. How did you find your way through those barriers?
- Selling a lot of albums is a good starting point. But I didn't start out with a lot of gear, rather I got a foot in by doing the best with what I had. Because I've been focusing more on the technical side of the music business during the last 9 years I've continuously sought out better gear and to improve my studio. It's entirely possible to make excellent productions with very limited gear, but once you start mixing and mastering the demands are much higher.

So my best advice would be to focus on what you have instead of what you don't have, and constantly try to improve your skills and experience in all areas.

Could you tell me something about your favorite gear?
- I have a lot of favorite gear but apart from my ears my main digital tools is probably Logic Pro. I originally used Cubase on Atari and then Cubase on Mac. In 1998 I switched to Logic and, apart from a few years of using Pro Tools hardware, I never looked back.

One of my favorite analog units is the Crane Song STC-8/M mastering compressor which is a versatile and great sounding piece of gear. I'm also very fond of the slightly esoteric Summit Audio EQ-200. It's a great sounding, completely analog equalizer designed by Rupert Neve but with digital controls and recall.

I have the feeling, that today, most people don't have advanced outboard racks. You've been in the scene for quite some years, and what is your relationship to digital plug-ins?
- I started out working with almost only analog gear and then amassed quite a collection of various stuff. I then suffered what I now feel was a massive brain hemorrhage and went almost all digital for a couple of years. Realizing it didn't work or sound good enough at the time, today I've settled in a hybrid system where I use both plug-ins and analog hardware.

I use plug-ins from several companies such as Sonnox Oxford, Waves, Sonalksis, Softube and FabFilter. My go-to plug-ins for advanced processing are the Flux plug-ins.

I believe that plug-ins are often a timesaver, and most of the mixing I do is in the DAW. When do you use plug-ins, and when do you bring in your outboard equipment?
- It's possible to do great mixes exclusively in a computer based system. It's more to do with your skills and knowledge of how to mix in-the-box than anything else. The ITB approach is slightly different because you don't have the intrinsic forgiving qualities of analog to naturally compress or enhance your sound. So you often need to apply several stages of compression such as serial low and high level compression on the channel followed by sum compression or parallel compression. You also need to apply a touch of harmonic enhancement or distortion on purpose in some places. These tricks work well when mixing on an analog console, too, but their necessity becomes more evident when mixing ITB.

It's probably possible to do mastering in a purely digital system but I prefer to work with analog hardware. When I'm mixing I work with a lot of plug-ins but I like to run some tracks through a hardware 1176 and strap an SSL XLogic G Series compressor on the mix buss.

What is the most common misunderstanding(s) in music production in your opinion?
- I think there are two very common misunderstandings. The first being that buying a new plug-in equalizer will give you what you're looking for. The second being that you can become succesful on talent alone. Most succesful people in this business have worked very hard at what they do in order to get where they are, and they are great at social networking or marketing.

Everything's a priority. What have you put yourself most into - production, mixing or mastering?
- Until around 2003 I focused on music production and mixing. Since 2004 I've prioritized mastering and teaching the most. Mastering is not just an extension of mixing or general audio engineering but a specialized area of work that require a great deal of research and experimentation.

I still produce a couple of tracks per month and I mix whenever I have time or someone bugs me enough to do it.

It's quite difficult to put together a career based on just recording artists or mixing the tapes coming from them. I see you are covering all bases - selling products, teaching, writing and producing. How are you managing it all?
- You marry the perfect woman. My lovely wife is taking care of the home as well as her own career as a communications expert - which frees me up to spend a lot of time on what is both my job and my hobby. Today I have a fairly normal work week of about 40 hours.

I've actually had to set up some rules which prohibits me from working during weekends or I'd be working all the time, which isn't good when you have two children.

Finally, how would your life be in another career than in the field of audio?
- I've never had any other job so it's hard to imagine not being self-employed and working with audio. It would have to be something slightly similar, maybe a freelance graphic designer or movie maker. I wanted to study immaterial rights law on the side for a short period of time because I became a somewhat involuntary expert in the legalities of the music business. But ultimately I think my life would feel very empty without working directly with music and audio, and business is good - so I'm not leaving. 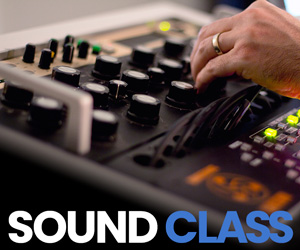